Every January since 1956, the DCA Academic Lecture Series has brought topical, global issues in focus, offering attendees first-hand knowledge of the issues.

This year’s series will feature four morning lectures and one evening lecture focused on the climate, politics and geopolitical tensions in the Indo-Pacific. All speakers will be in-person at the DCA. Audience can attend in-person and virtually.

Grateful thanks for the support of an anonymous donor in underwriting this series.

FOUR THURSDAY MORNING LECTURES AT 10:00am:
All speakers will be in-person at the DCA. Audience can attend in-person and virtually. Zoom link will be sent one day before the lecture to all ticket holders, in case their attendance plans change. 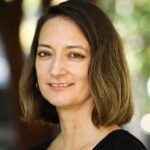 Dr. Mireya Solís is director of the Center for East Asia Policy Studies, Philip Knight Chair in Japan Studies, and a senior fellow in the Foreign Policy program at Brookings. Prior to her arrival at Brookings, Dr. Solís was a tenured associate professor at American University’s School of International Service.

Dr. Solís is an expert on Japanese foreign economic policy, U.S.-Japan relations, international trade policy, and Asia-Pacific economic integration. She is the author of Banking on Multinationals: Public Credit and the Export of Japanese Sunset Industries (Stanford University Press, 2004) and co-editor of Cross-Regional Trade Agreements: Understanding Permeated Regionalism in East Asia (Springer, 2008) and Competitive Regionalism: FTA Diffusion in the Pacific Rim (Palgrave Macmillan, 2009). Her most recent book, Dilemmas of a Trading Nation: Japan and the United States in the Evolving Asia-Pacific Order (Brookings Press, 2017), offers a novel analysis of the complex tradeoffs Japan and the United States face in drafting trade policy that reconciles the goals of economic competitiveness, social legitimacy, and political viability. “Dilemmas of a Trading Nation” received the 2018 Masayoshi Ohira Memorial Award. Dr. Zack Cooper is a senior fellow at the American Enterprise Institute. Dr. Cooper also teaches at Princeton University, is a partner with Armitage International, and co-hosts the Net Assessment podcast for War on the Rocks. He previously served on staff at the Pentagon and White House. He has also conducted research at the Center for Strategic and International Studies and the Center for Strategic and Budgetary Assessments. He is the coeditor of two books with Michael Green: Postwar Japan and Strategic Japan and is currently writing a book on the rise and fall of great militaries. Dr. Cooper received a Ph.D., M.A., and M.P.A. from Princeton University and a B.A. from Stanford University. Bonnie S. Glaser is director of the Asia Program at the German Marshall Fund of the United States. She was previously senior adviser for Asia and the director of the China Power Project at the Center for Strategic and International Studies. Ms. Glaser is concomitantly a nonresident fellow with the Lowy Institute in Sydney, Australia, and a senior associate with the Pacific Forum. For more than three decades, Ms. Glaser has worked at the intersection of Asia-Pacific geopolitics and U.S. policy.

From 2008 to mid-2015, she was a senior adviser with the CSIS Freeman Chair in China Studies, and from 2003 to 2008, she was a senior associate in the CSIS International Security Program. Prior to joining CSIS, she served as a consultant for various U.S. government offices, including the Departments of Defense and State. Ms. Glaser has published widely in academic and policy journals, including the Washington Quarterly, China Quarterly, Asian Survey, International Security, Contemporary Southeast Asia, American Foreign Policy Interests, Far Eastern Economic Review, and Korean Journal of Defense Analysis, as well as in leading newspapers such as The New York Times and International Herald Tribune and in various edited volumes on Asian security. She is also a regular contributor to the Pacific Forum web journal Comparative Connections.

Ms. Glaser is currently a board member of the U.S. Committee of the Council for Security Cooperation in the Asia Pacific and a member of both the Council on Foreign Relations and the International Institute for Strategic Studies. She served as a member of the Defense Department’s Defense Policy Board China Panel in 1997. Ms. Glaser received her B.A. in political science from Boston University and her M.A. with concentrations in international economics and Chinese studies from the Johns Hopkins School of Advanced International Studies. Dr. Tanvi Madan is a senior fellow in the Project on International Order and Strategy in the Foreign Policy program, and director of The India Project at the Brookings Institution in Washington, DC. Dr. Madan’s work explores India’s role in the world and its foreign policy, focusing in particular on India’s relations with China and the United States. She also researches the U.S. and India’s approaches in the Indo-Pacific, as well as the development of interest-based coalitions, especially the Australia-India-Japan-U.S. Quad.

Dr. Madan is the author of the book Fateful Triangle: How China Shaped US-India Relations during the Cold War (Brookings Institution Press, 2020). Her ongoing work includes a book project on the recent past, present, and future of the China-India-US triangle, and a monograph on India’s foreign policy diversification strategy.

Dr. Madan is a member of the editorial board of Asia Policy, a contributing editor at War on the Rocks, and a member of the Australian National University’s National Security College’s Futures Council.

TUESDAY EVENING LECTURE: RECEPTION AT 7:30pm, LECTURE AT 8:00pm (separate ticket needed).
All speakers will be in-person at the DCA. Audience can attend in-person and virtually. Zoom link will be sent one day before the lecture to all ticket holders, in case their attendance plans change. Dr. Sheila A. Smith is John E. Merow senior fellow for Asia-Pacific studies at the Council on Foreign Relations (CFR). An expert on Japanese politics and foreign policy, she is the author of Japan Rearmed: The Politics of Military Power, Intimate Rivals: Japanese Domestic Politics and a Rising China (released in Japanese as 日中 親愛なる宿敵: 変容する日本政治と対中政策), and Japan’s New Politics and the U.S.-Japan Alliance. She is also the author of the CFR interactive guide Constitutional Change in Japan. Dr. Smith is a regular contributor to the CFR blog Asia Unbound and a frequent contributor to major media outlets in the United States and Asia.

Dr. Smith joined CFR from the East-West Center in 2007, where she directed a multinational research team in a cross-national study of the domestic politics of the U.S. military presence in Japan, South Korea, and the Philippines. She was a visiting scholar at Keio University in 2007-08, where she researched Japan’s foreign policy towards China, supported by the Abe Fellowship. She has been a visiting researcher at two leading Japanese foreign and security policy think tanks, the Japan Institute of International Affairs and the Research Institute for Peace and Security, and at the University of Tokyo and the University of the Ryukyus.

Dr. Smith is chair of the Japan-U.S. Friendship Commission (JUSFC) and the U.S. advisors to the U.S.-Japan Conference on Cultural and Educational Interchange (CULCON), a binational advisory panel of government officials and private-sector members. She teaches as an adjunct professor at the Asian studies department of Georgetown University and serves on the board of its Journal of Asian Affairs. She also serves on the advisory committee for the U.S.-Japan Network for the Future program of the Maureen and Mike Mansfield Foundation. Dr, Smith earned her M.A. and Ph.D. from the political science department at Columbia University.